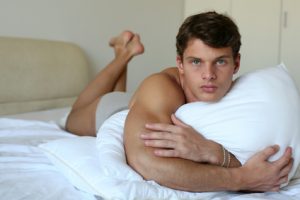 There is a photo attached to his reply.  A blonde woman leans against him, her arm over his shoulder, her head tilted towards his, both of them smiling.  A friend or work colleague.  In the background, another couple: a bearded guy in a dinner suit and a girl in a little black dress, both smoking.

He texts at the time he is due.  He will be half an hour late.  You re-read the emails and start to get excited. When arranging to meet a complete stranger for sex, arousal starts at the point of certainty.

His advertisement is straightforward.

“Good looking, athletic, attached but wanting to meet other guys on the side for hot sessions.”  It reads ‘uncomplicated’.

He arrives promptly at the re-negotiated time and you buzz him in.  He is broad shouldered and solid. His hair is dark, short back and sides and in t-shirt, shorts and runners he looks a boyishly cute twenty-six or twenty-seven.  A real jock.  There are those uncomfortable first moments when the nervousness of being in a stranger’s apartment cannot be disguised.  He starts small talk.

-I don’t often get over to the Eastern suburbs.

-Where are you from?

-Manly.  Are you from Sydney originally?

-No, Perth. I don’t think anyone in Sydney comes from Sydney do they?  How about you?

-Right. And you have a boyfriend?

It was something you had not considered so you just nod and say nothing and wait for some kind of response that never comes. He breaks the silence.

-Where should we go?

You lead him to the bedroom and drop the blind.  Then he puts up his hand.

-We have to be safe.

-I don’t want to pass anything to my girlfriend.  It would be a total giveaway about me.

You nod and he moves to embrace you and starts squeezing your thigh.  You unzip his shorts.  Then you gently push him onto the bed.  He wants to kiss but you nuzzle his neck instead.  Then he rolls face down and parts his legs.

You lie beside him and run your fingers along his back.  You think about the girl in the photo, the way their heads touch.  He had asked you to be discreet with the image.  You wonder whether it is that girl who is his girlfriend.  What kind of guy sends a picture of his girlfriend to a hook-up?  You think about the smoking couple. Perhaps a group of friends, their friday nights spent in pubs on the north shore, the guys talking sports, the girls wedding plans.  Those inevitable conversations about real estate.  Then there is this, his secret life.  And right now, this beautiful twenty-something jock lies prone beside you, the passive recipient of your attention.

He rolls over and looks at you puzzled.

-I can’t do it. It doesn’t feel right.  You know, your girlfriend and everything.

He gets up and dresses. You follow him to the kitchen where he laces up his runners. You want to explain.

-I’ve been in this situation before and didn’t feel good about it afterwards.

In a couple of minutes he will be out the door and in his car heading back over the harbour.  You will wonder briefly, as you make a cup of coffee, if you would have given in had he tried to persuade you out of your moral standpoint. You will regret what you just gave up, how easy it all could have been.

And then you will go back online.

This site uses Akismet to reduce spam. Learn how your comment data is processed.